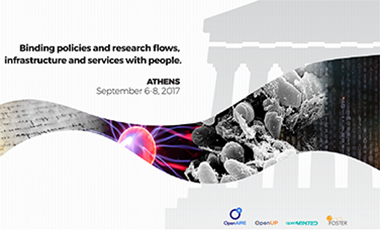 The goal of the workshop was to further the understanding of innovative dissemination practices in open science and their relationship with altmetrics. In the first part of the workshop, researchers from the H2020 project OpenUP presented the results of their landscape scan on innovative dissemination, including a literature review, a survey of more than 1,000 European researchers, and 10 case studies, which were crowdsourced from the community.
The main insights from their overview were that dissemination in an open science context starts in the earlier stages of a research project and thus becomes an integral part of the research cycle. Dissemination becomes more interactive, and therefore the line between dissemination and participation becomes blurry. In addition, the researchers found that there is an avant-garde of researchers successfully employing an immense variety of innovative dissemination methods, but that the majority of researchers are not using them, even though they see the need to engage with the general public.

The exercise brought a number of interesting insights. While almost half of objectives are equally important in both scenarios (current system and open science system), such as “Influencing policy making and practices” and “Contributing to the body of knowledge” (marked by the black vertical lines next to the respective card), a few significantly increased in importance in the open science system (marked by the green vertical lines next to the respective card), including collaboration and participation of target audiences and “To transfer research into practice”. Most insightful, there were 5 objectives that lost in importance, most significantly “Attracting future funding”, “Justifying funding for research”, “Raising one’s own or one’s organization’s profile”.

The exercise brought a number of interesting insights. While almost half of objectives are equally important in both scenarios (current system and open science system), such as “Influencing policy making and practices” and “Contributing to the body of knowledge” (marked by the black vertical lines next to the respective card), a few significantly increased in importance in the open science system (marked by the green vertical lines next to the respective card), including collaboration and participation of target audiences and “To transfer research into practice”. Most insightful, there were 5 objectives that lost in importance, most significantly “Attracting future funding”, “Justifying funding for research”, “Raising one’s own or one’s organization’s profile”.

“Informing target audiences” and “Receiving feedback for research” still received many votes in the open science system, but became less important. One explanation for this is that these votes were redistributed in favour of collaboration and participation.
In between the exercises, two approaches to innovative dissemination from other workshops/events in the OSFair were presented. Martine Oudenhoven’s talk was entitled “From dis-semination to engagement”, and it addressed the issue that a lot of researchers still think about communication according to the ‘science deficit model’. This means they feel that problems are caused because the audience has gaps in their knowledge that have to be filled. However many examples over the years have shown that reality is a lot more complicated than that. Martine argued that it would be good to think less in terms of dissemination and more in terms of engagement. In short, community engagement is about really knowing and understanding your stake-holders (start with listening), giving them something they can use and facilitating two-way communication.
Menelaos Sotiriou talk was about the use of theatrical performances (the principles) in order to introduce RRI in a research institution. RRI is everywhere, but what does it really mean to be embedded in a living environment of diverse interests and expectations? How will you relate to demanding stakeholders around you, ranging from academia to economy, from civil society to policymakers or media?
Menelaos presented the methodology and the activities, in which the participants are involved. The workshop participants collaboratively create a dynamic role-play, involving you into a mutual learning process.
After the two project presentations the current beta version of the dissemination toolbox on the OpenUP Hub was demonstrated. This was done by presenting two user scenarios: a young researcher who wants to disseminate her research by using video format, and a policy maker who wants to discover new ways for disseminating research to larger target audiences. The demo was followed by a brief presentation of a few key messages from interviews done with science communication experts on how to disseminate research outcomes to the general public and businesses (see Figure 2). The presentation kicked off an open discussion on this topic open to all participants.

Figure 2: Key messages from interviews done with science communication experts on how to disseminate research outcomes to the general public and businesses

The final presentation in the workshop was held by Stephan Gauch and aimed at introducing the results of the OpenUp taxonomy linking dissemination channels and altmetrics. The taxonomy, which was inspired by sociology of evaluation and numerous sources and activities within the OpenUp projects such as expert Interviews, survey data and desk research supports researchers to make informed decisions, e.g. how they could substitute different channels of dissemination as well as where to find altmetrics providers that address these channels.

Figure 3: Results of a cluster analysis of different dissemination channels based on their use (inform, disseminate, appreciation, societal impact) 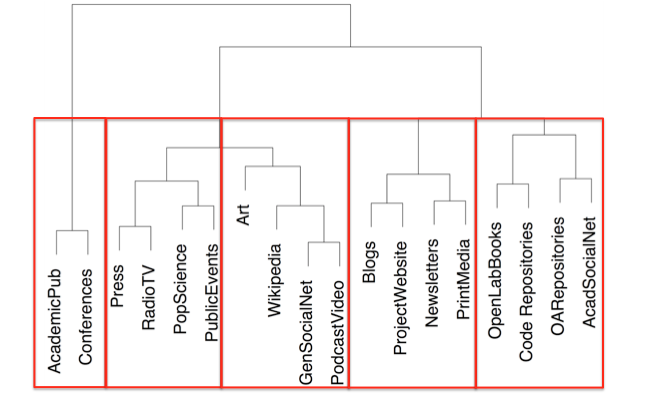 One branch of the taxonomy, based on the survey results (see Figure 3) shows that there is indeed a structure in how researchers use new channels of dissemination, that could be summarized into the categories:

The presentation also gave a first impression of the altmetrics branch of the taxonomy, which consists of an extensive set of tables that will be part of the OpenUp Hub in the foreseeable future. Finally, potential future trends within altmetrics where introduced, which were inspired by desk-research as well as in-depth expert interviews.

For innovative dissemination, it became clear that good practices, guidelines and checklists are needed to allow for an informed choice of researchers. In addition, it will be important to clarify the roles of stakeholders in the dissemination process, and in the process, to validate the innovative dissemination framework with different audiences, in particular businesses and the general public. Next to that, the workshop confirmed that researchers need support in disseminating their research output to target audiences beyond their peers (e.g. by their science communication department or agencies) and that responsibilities and the role of researchers in terms of dissemination need to be re-assessed and clearly defined.

Regarding altmetrics next steps will definitely have to incorporate the user perspective and per-formative effects of altmetrics on researchers, organisations and the science system as a whole. This will, to some extent at least, require to move beyond the numerical nature of altmetrics and will require a shift to understand the reflexivity of these metrics, as a source of retro-action to what they measure, and how publishing and researching shapes and is being shaped by these new metrics. This will most likely include a shift towards the narrative and content-based perspective of altmetrics and how they are embedded in research practices.

The results of the validation exercise have corroborated an insight that stems from many analyses of the current science system: in order to allow for a transition to open science, evaluation of research has to be changed significantly. This is a call to action that goes to policymakers, funders and research organisations. They have control over what is maybe the most important lever for change.