The road towards Altmetrics

To understand the current situation of Altmetrics and the Big Bang of the term the last decade, it is beneficial to understand how and where ideas originated. What was the scenery before? 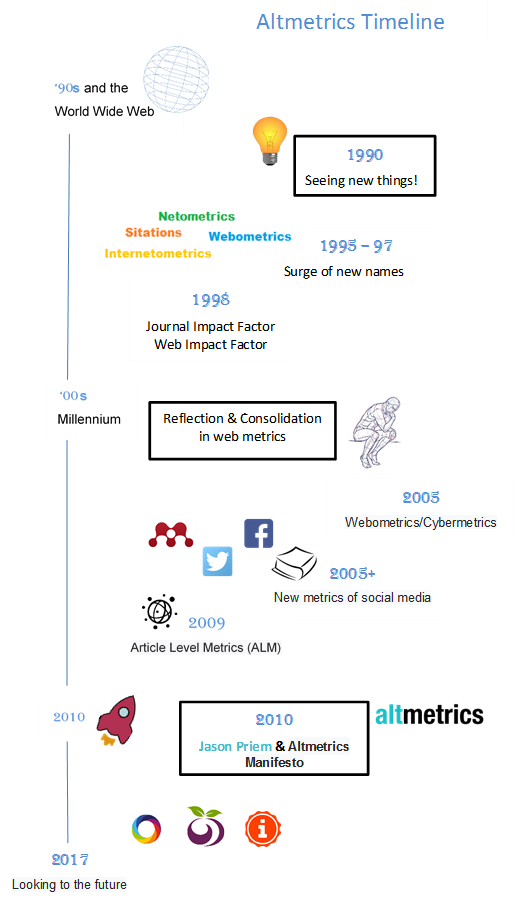 To understand the current situation of Altmetrics and the Big Bang  of the term the last decade, it is beneficial to understand how and where ideas originated. What was the scenery before the emergence of the new player in the field of scientific communication and what conditions led to the establishment of the term?

With the advent of the web and the establishment of web based services, it comes as no surprise that the informetric community took up the idea of the web as a relevant new source of information flows, which will also have a relevance to scientific communication. Hence, the information science community came with a substantial amount of terminological attempts to label information science based metrics for web-based communication and interaction with the earliest candidate “Netometrics” (1995). Bossy heralded web-based indicators as early as 1995 to be “The new face of Scientometrics”, building her assessment on the ideas by the French science studies scholars Latour and Callon arguing, that “remote files retrieval counts” or “clients hypertext links” may give way to new forms of evaluation as they are close to the laboratory.

In parallel, attempts were made to establish an infrastructure to the Science Citation Index but aimed at the web, dubbed the Open Text Index (1996). Ideas of a reminiscent of a global brain revolutionizing scholarly information flows and cooperation were introduced under the term “Webometry” (1996). In parallel, Almid & Ingwersen (1996) coined the phrase “Internetometrics” in a conference paper, which they rephrased to “Webometrics” just one year for their journal publication (1996). A journal termed “Cybermetrics” (1997) was founded. In the first issue of this Journal, Citations in the web became “Sitations” (1997).

Nevertheless, the road of acceptance of the new term was not easy as the quality of web indexing services came into question (1997) and the usefulness of the functional capabilities of indexing services was deemed to be inadequate for bibliometric types of analyses (1998). The opportunity arose again with the argument that web-based scholarly communication was not limited to scholarly discourse and formal communication, but also reflected informal communication among researchers. Several attempts were made to enrol and adapt evaluative concepts from the realm of bibliometrics such as the Journal Impact Factor (JIF) in terms of a Web Impact Factor (WIF) (1998).

Beginning with the year 2000, informetrics entered a phase of further scrutinization and conceptual reflection. This period also featured a surge in “correlation studies”, which aimed at assessing statistical correlations between established bibliometric and webometric indicators and concepts. Harter & Ford (2000) were the first to highlight systematic issues and challenges for web-based assessment of E-journal impacts. Odlyzko (2002) argued that with the advent of new forms of web-based communication, the need for traditional peer review would decrease, and by the same token, novel forms of scrutinization and communication would emerge outside traditional journals (2002). User motivation and user behaviour studies (2000-2003) and content-based analyses (2003) to understand hyperlinking behaviour emerged. In a different context, Lewison (2003) argued that citations to journal papers from clinical guidelines by the UK NICE should be assessed as a complementary way of assessing broader research impact beyond the scientific domain.

Between 2003 and 2006 methodological scrutinizations reached a point that warranted extensive programmatic orientations through state-of-the-art reviews and framework concepts for webometrics/cybermetrics emerged (2005). Conceptual reflection extended towards early webometric concepts such as the Web Impact Factor (2006), the need for understanding the use of new outlets of academic output such as online journals (2007) or the relationship between self-promotion and visibility (2008) or underlying nature of web data in terms of its persistence over time (2004).

These first conceptualizations and reflections, we argue, structured the way new metrics of social media use in the scholarly landscape have been taken up. New platforms established that utilized data sources in a new way and opened new opportunities for analysis to the informetric and scientometric community. These years also witnessed the establishment and stabilization of new concepts that influences scholarly discussion on the integration of web-based indicators to scientometrics. Many arguments and conceptual differentiations in cybermetrics and webometrics re-emerged in debates about these new phenomena to be known by ‘Altmetrics’.