The article “Brain Projects Think Big”  was published October 13, 2013, the early stages of the Human Brain Project . The goal was to provide a younger audience with an understanding of the Human Brain Project. The project is primarily a systematic cataloguing of everything that is known about the brain, as well as, the development of ingenious experimental and theoretical methods to probe the brain, and put together all learnings into a computer model of the brain.

Dissemination started at the same time as the launch of the Human Brain Project. As a next phase, the project plans to open a “brain corner” in many science museums worldwide to share updates and important results.

Frontiers for Young Minds produced the videos, and media materials at a low cost (<5,000 EUR). For the same effort, external graphics design, web design and video production, a researcher will spend the same (< 5,000 EUR).

As of this writing, the count of 20 abstract views, 117 full-text views, 222 PDF downloads. The article has been accessed primarily in the United States and China. 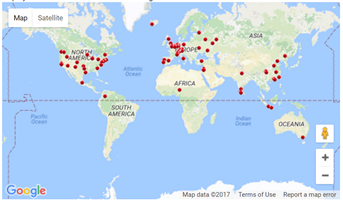 From a gender demographic, two male scientists wrote the article - Idan Segev, and Felix Schürmann. It was reviewed by an 11-year old female student, named Abby.
The Frontiers for Young Minds Editorial Board has a 73% to 27% female to male ratio. The Chief Editor is male. Two out of six Specialty Chief Editors are female, and seventeen out of nineteen Associate Chief Editors are women.