How do we rid scholarly communication of an exploitative commercial agenda that prevents openness to reach its intended goal? 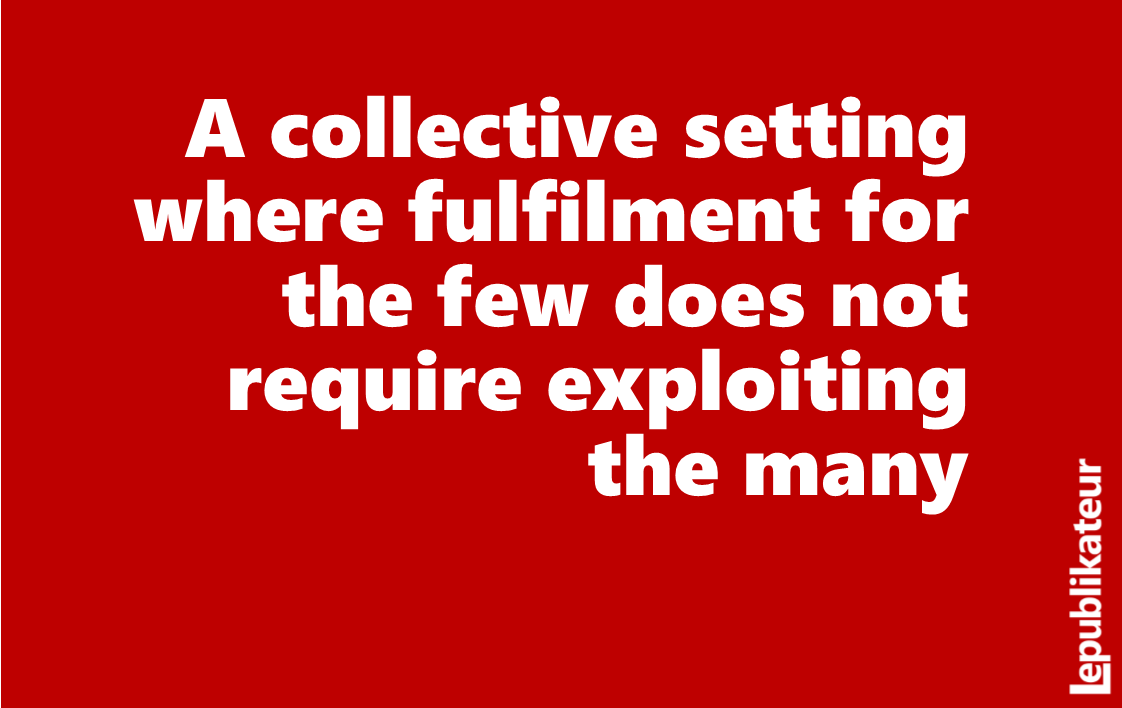 Openness is good for research. But equality is better. So far, the two don’t always align and we urgently need to change that. The current system of scholarly communication is a false meritocracy; it's profoundly inequal in that many decisions aren't based on ability and accomplishment. Against our intentions, much of the current approach to openness doesn’t alleviate this inequality. The most pressing problem here is what the hermetic discussions on openness didn’t manage to achieve: rid scholarly communication of an exploitative commercial agenda that holds both research and higher education in a tight grip.

What many Open Access proponents desire is pretty much a socialist state of scholarly communication—collective ownership at its best. Yet, it barely is called that way. Instead, the uses and advantages of Open Access (and Open Science alike) are pronounced by the usage of key concepts of economic neoliberalism: impact, performance measurement, and growth are but a few keywords associated with openness. In this environment, it’s easy for traditional capitalist market players to capture the debate and incorporate it into their own commercial agenda. Even worse, policy makers enforce this agenda by pushing for a half-baked revolution of openness. This—partly—reinforces inequality and academic elitism.

This is not what Open Access (or Open Science) were intended to be. But how do we get to more equal openness? A good start would be to change the attitude of ‘openness advocacy’ to arrive at an openness that serves researchers with respect to individual research characteristics, that is profoundly built on collective ownership, and that is integrated rather than added-on.

Firstly, how do we ensure that more openness considers the characteristics of individual research processes? The history of scholarly pursuit is a complex tree that is rooted in a few broad areas and branches out into a myriad of niche subject areas. Each of those areas has grown characteristics that are represented in paradigms, methods, evaluations, authorship, readership, and citation behaviours, to name but a few. In relation to this, there can’t be one scholarly communication. There can only be many different versions of how the abundance of different scholarly pursuits are being communicated. Likewise, our advocacy of openness must move from a mass approach to a much more nuanced one. Scholars deserve to be advised in regard to their specific needs. When they have to translate a colourful cascade of Open Access models into their specific domains, many get lost in translation. It’s the task of advocacy and expert advice to make this translation work.

Secondly, commercial exploitation needs to be called by its name—and likewise does its socialist counterpart. There are many barriers that stand between author and reader, and advocacy for openness usually doesn’t favour to break with them entirely (which would include even having no intellectual barriers, as in: everything gets published). But neither should it result in having just those barriers left that require openness to be bought. This may seem obvious for publishing experts, but it isn’t for the ordinary researcher and her environment. The definition of openness thence needed to include an answer to: how do we make access to communication as equal as possible on all non-intellectual aspects? One feature of this definition lies in the socialist condition of openness. The commercial agenda needs to be called by its name, the interest of all stakeholders need to be defined. Most crucial in this instance is that funders, institutions, and policy makers need to move away from collaborations and big deals with exploitative commercial entities and encourage collectively-held solutions. On the other hand, institutional publishing, collectively-operated specialised repositories, or not-for-profit discoverability services are great ways to improve more equal access to the desired openness. It’s those hands-on solutions that scholars need to be aware of—current research shows they aren’t. The need to counter corporate lobbying is important here, but the nuanced communication of commercial exploitation to those who make everyday decisions on openness is even more pressing.

Thirdly, how do move from siloed to more integrated discussions? Scholarly pursuit is a never-ending process of interconnected activities. When we discuss how research should be communicated, we need to integrate our discussion into this chain of activities and its interconnectedness: more openness is restricted by traditional brands; irresponsible use of impact metrics favours elitism; common peer review processes reinforce the established; output evaluations represent skewed images of accomplishment. Again, all obvious points to experts. Yet, the researchers are given advice in separated bits on Open Access, Open Data, the IF, REF, or publisher brands; separated, these bits run out of breath before they reach their goal. Where is the integrated, systematic discussion and education on communicating research? Many researchers long for change, they may desire to publish in new formats; to separate results from methodology and analysis in peer review; to consider qualitative output evaluations; to spread their research as far as possible through open repositories; to integrate communication as an ‘on-the-fly’ instead of a ‘(long-)stop-and-go’; to see audiences not as potential citations but a diverse readership including the public; to consider conferences not as ‘showing off’ but as ‘putting my ideas to discussion’. However, most stick to the default. The individual researchers can hardly be blamed. Considering how many roles they take on—as readers, authors, reviewers, teachers, judges, and, sometimes, researchers—for which of these roles are they properly equipped?

In the end, we’re discussing the communication of knowledge. Yet, we haven’t managed to integrate all our knowledge on communication to form a better system. To get there and to lead scholarly communication a big step forward in terms of inclusion, equality, and openness, we need to consider nothing less than this scenario: If all scholarly pursuit had no communication system at all today and it needed one by tomorrow, what would be its optimal form? This, then, is what urgently needs to be transformed into hands-on advice for the researcher.