OpenUP synthesised and validated key project results and derived 5 recommendations to foster the take-up of novel practices in scholarly peer review, research dissemination & assessment. Discover the rational behind the Recommendation #3 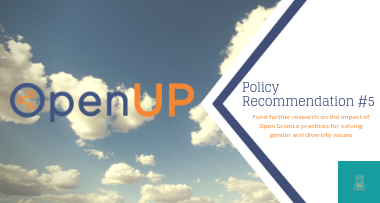 Despite some progress in the past decade, gender inequity in research and academia is still evident. It can be observed in all research processes, from research team compositions and roles, publication preparation and reviewing to granting funding and evaluation of research(ers).[1] National initiatives at country levels aim at raising awareness on the issue and promote practices that could increase gender equity in research. In addition, various initiatives are introduced by research organisations, funders and publishers that aim to decrease the gender bias in reviews-assess-disseminate cycle of scholarly publishing. Aspects of Open Science (such as OPR, innovative dissemination and alternative metrics) also offer some solutions by introducing transparency and inclusiveness to the research cycle. Some of these solutions could help reduce the persistent gender bias present currently in academia. However, they also pose risks and many researchers and other stakeholders still question their unconditional applicability and implementation. There are gaps in data on the effects and impacts of OPR, innovative dissemination and alternative metrics on gender equality in research and academia.

The OpenUP project identified and investigated gender inequality in research. But it was beyond the scope of OpenUP to delve into and analyse the issues and to what extent they could be addressed with by open science. There is limited evidence on impacts of OPR, innovative dissemination and alternative metrics on gender equality in research and academia and further research, e.g. in a dedicated gender and open science project, is needed.[2] European and national policy makers as well as funders and publishers should further investigate the impact of Open Science practices on gender and diversity issues by collecting and analysing data on such practices.

Through increasing transparency, Open Science offers mechanisms which could improve gender equality in research and academia. However, issues such as monopolization of knowledge production or vulnerability of individuals or minority groups through increased exposure persist in an open science ecosystem. More dedicated research is needed to assess the impact of open science on gender and diversity issues. Also, the evidence generated should be exploited in order to raise awareness and train institution decision makers and researchers to employ practices fostering gender equality in research and academia.

OpenUP synthesised and validated key project results and derived five recommendations to foster the take-up of novel practices in scholarly peer review, research dissemination and assessment while considering existing gaps in evidence and disciplinary differences. To find out more about the OpenUP policy recommendations, follow the link.